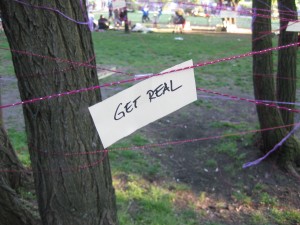 I am working on this semi-fictional short story right now. I say semi-fictional because it’s based on a real event. Sort of. Actually it’s based on a person I saw at an opening. The rest is pure fiction. All made up by me. But the person exists. I don’t know him and I have never talked to him, but he does exist. I know his name, what he looks like and a little bit about what he does. That’s it. And it’s not like he’s one of these fascinating freaks or anything like that, he’s just a sort of regular guy in the creative scene. I made a few behavioral observations about him that night that for some reason triggered a story in my head. I’ve changed his name, for obvious reasons, but the character is him. Or is it? Not really. How could it be? I don’t even know him. So is the character based on him? Not sure. In order to base something on someone wouldn’t you need to know something about that person? Like I said, I really have a very minimal knowledge of this person, pretty much nothing apart from those few glimpses of pretty normal ‘being at an opening behavior’ I got that evening, so how could the character possibly be based on him? Does it matter? I suppose in the grand scheme of things it’s pretty inconsequential and irrelevant, but in my own head this raises several mildly interesting questions.

For instance, if I see him again, will I be able to keep a straight face? In a way it feels a bit like having a secret, a really bizarre secret. I’m sure writers do this all the time, I mean I know I steal and borrow from the people around me to build my characters, but I’ve never taken a whole person and thrown them into a story like that before. Are you even allowed to do that? Legally, sure, because how would anyone ever be able to prove it? Especially considering how little reality based substance I have written into this character, there’s not even a description of how he looks. No one would ever be able to tell, but I know it’s him. So can I do this? Sure I can. No one could stop me, not even me. The story wants to be written so it will get written, that’s the way it is. But it does feel a tad weird.

So that’s why I am wondering about my reaction if I would ever run into this guy again. Especially since the character in question isn’t all that sane. Having that character be based on you is not a compliment. And I suppose that’s partly why I am wondering what it would be like to see him again. Of course there is no way in hell he’ll ever know unless I tell him about it, which seems very unlikely to say the least, but still. Because what if I should, by a weird twist of fate, actually end up talking to him. Would I be able to distance myself from the character in my story? Would I mix them up? Will the character that I have created influence my opinion of him? Considering that the character isn’t very nice, I would hope not, but at the same time I obviously know the character better… Would I compare them? Probably. And above all, would I test him to see if he resembles ‘his fictional self’? I think that’s what makes me most worried, that I would somehow turn it all into some bizarre experiment. And then there is of course the compulsive thinking train of thought, the scenario where I tell him about it. Because do I wonder what that would be like, what it would feel like, to have someone, a complete stranger, tell you that they have put you in a story. Bizarre for sure, but would you get upset? I don’t know, but I do think you would get curios. I think I would. In fact, I’m sure I would be curious. I’m almost always curious. And I’m very curious to find out how a person would react to being told such a thing and that’s why I don’t trust myself completely to be able to shut up about it if I do end up running into him. So part of me hopes that will never happen, and part of me longs for it. It’s not entirely unlikely and that kind of makes it worse. Worse in the sense that I actually have a reason to ponder all of this.

But I think the question that really occupies me the most, is what all of this means. What kind of process this really is. Life invading art, or art invading life? Because if I do run into him again there is no way I’ll be able to form an uninfluenced opinion about the real person. Sure, there’s plenty to discuss in that statement, is it ever possible to form an uninfluenced opinion about anything? But in this case it would all be based on a fictive character that I made up. Then again, people do that all the time, it’s called projection. But I suppose the difference is that most people don’t go through the trouble of writing it all down.

Yes, this experience has my thoughts going in endless loops. And the question is what is actually real? Essentially we are all characters in our own story and as a writer, the people you make up are sometimes just as real as the people in your everyday life. I actually spend more time with the people in my head than I do with my biological family. And these people, even though I have indeed made them all up, do actually take on a life of their own. They become actual individuals with their own inner logic and motivations. It’s part of the process. And only when they reach this stage can you actually write about them. When they become real. They are not real in the sense that they have a physical manifestation in the world, but in the sense that they have their very own psychology and personality. A personality that is just as inflexible as that of any person with a manifest physical presence. Sure they are creations of my imagination, but that doesn’t mean that I actually have control over them once I have actually created them. It’s like there is a point where I have to let go and just let them guide me. A point where I am no longer in charge.

Of course this whole project also has me pondering the whole mimesis, ant-mimesis theme, and if I take Oscar Wilde’s anti-mimesis theory quite a bit further than he most likely intended it, it would mean that this guy actually is the character in my story too. Or? Like I said, I’m taking the theory way too far, but as a thought experiment it’s still interesting, because what is more real? The story or reality? Especially in this day and age where image is everything. It’s not about how something is but about how it’s perceived. And again, in this case it’s not that relevant, but if you look at our celebrity culture there is a certain similarity. All these people that we actually don’t know, but still we feel we have a pretty good idea of what they are like. We get images and quotes and from this we then build our own idea of what they are like. We use them as a projection surface. And that’s not that far removed from what I have done with this guy. I’ve used him to project some ideas that I have, he’s an instrument in my story. And whereas in this case it’s mainly a personal problem for me, in the case of the celebrity culture it’s more of an ontological issue. Are the images just as real as the people behind them? Going back to the issue of being able to form an uninfluenced opinion about someone, that’s of course impossible when it comes to public figures. We already have an opinion that we may or may not adjust, but our interpretations of anything the person does will be colored by these predefined opinions. Wilde’s thesis was that art points out things, makes them visible if you will, and thus essentially puts them into existence. And if you apply that thought on today’s celebrity culture one could argue that this is what image building is all about, to create a persona, a character that to some extent is fictional. It raises some very interesting questions about reality, doesn’t it? Because who is to say what is more real, the image or the person behind it?

If we go with the mimesis theory instead the answer is of course a very different one. According to this everything is but a mimicry, so if I simplify and not only take this theory way too far, but also mix in some psychoanalysis, the whole story would essentially just be about my own twisted mind. And in the bigger cultural perspective it would be about our twisted collective mind. The statement regarding the matter of affairs might very well be accurate in both cases, but the really interesting thing here is actually that regardless of what position you take regarding mimesis/ant-mimesis, it’s still all about perception. How do you perceive reality? As a mad man or as a receiver of images? And again the question arises: how can we tell what’s real? Is art imitating life, or is life imitating art? Is art initiating life? Or is life initiating art?