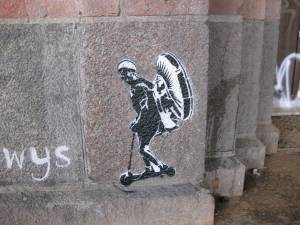 stupidity always makes me angry. and most of the time the political opinions about graffiti are insanely stupid. “we must wage war against graffiti. it is a danger to society and creates an environment of insecurity and encourages crime.” ok, like how? how is it dangerous that people create art on walls in our public space? how does that create insecurity? and encourage crime? people see graffiti and think: “oh there’s graffiti here, let’s go mug people and break things”? i don’t think so. there is a huge gap in the logic here. so huge that i am surprised anyone actually believes this shit, but people actually do. and that is scary. i just read a survey in a newspaper and according to that 70% of the people said they were bothered by graffiti. ok… what about all the huge advertisements that are everywhere that are trying to make you buy even more shit you don’t need? anyone finding that annoying? i sure as hell do. but they are allowed to put their shit everywhere. they are not considered a threat to public safety. so it’s better for the public to have a huge advertisement that further feeds the idea and the notion that the only way to get happy is to consume than to get to look at art for free? is that the real problem here? that it is for free? they didn’t ask for permission and they didn’t pay for the space hence it has to be bad for society? there is no money here yo! no one payed and no one is trying to make anyone buy shit. oh scary!

to me it is just completely insane to even make this that much of an issue. graffiti is NOT a menace to society. it is pictures on walls. it is creativity. it is taking back the public space. and the reason people feel threatened by it is because they were told to feel like that. sure not all graffiti is a master piece, but there are master pieces out there. just look at them.

that’s the real problem here. people don’t even see what’s around them. they do not stop to think or reflect. and they listen way to much to dumb shit without even questioning it. because seriously it is a lot more offensive to see giant advertisements for luxury products that most people can’t afford than to see a free art exhibition spanning all over the city. why is ok that they shove their images down my throat just because they payed someone? the didn’t pay me! i think commercialism poses a lot more serious threat to society than graffiti. we are all getting brainwashed to think we want shit we don’t really need. and that is worse. that is what really creates insecurity. not images on walls.