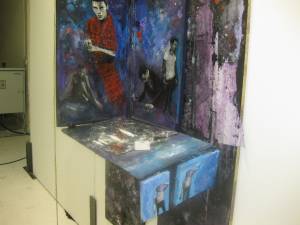 A while ago I was at a street art fair. With an ambition to not only have a look at the art but to also write something about it I brought along my camera and a note pad. I walked around in the big hall taking pictures and making random notes trying to figure out what the hell I was going to write about all of this. What I was going to do with all of these impressions. Writing something about all of the artists was so obviously impossible, so what then? I kept thinking “what do I want to write about all of this?” And I am still not sure.

Art fairs are difficult. Just like music festivals are difficult. It’s so easy to get overwhelmed by all the impressions. At least for me. It’s at times like that I realize just how difficult it is to  stay in the moment, to really process what you are actually experiencing as you are experiencing it. Even though it’s all so amazing and inspiring it just turns into a big blur of awe.

Afterwards I saw a friend of mine:

Very descriptive, huh? But that’s the problem, I find it hard to say something beyond that. Because it was rad. Obviously there were things that I liked more, pieces that I spent more time with, but as far as an overall impression goes, rad is pretty much all I can come up with. Pitiful, isn’t it?

But the plan was to write about it, so I feel I should honor the commitment I made to myself  and try to come up with something more to say about it than ‘rad’.

The question that kept haunting me as I was walking around looking at all the art was “what is this?” And that question has been haunting me ever since. What is street-art? And what was I actually looking at in there? What does it really mean?

What’s the difference between street-art and contemporary fine art? Is there a difference? Yes, I do think there’s a difference, and I think mainly that difference has to do with the attitude. They way I see it street-art is related to punk, and rather intimately so. They share that same “DIY” element of rebellion.

Just like music, art works on a deeply intuitive level. You can like it without understanding it on any other level than that pure immediate sensation it gives you when you’re exposed to it. It’s about taste. But of course that’s just one aspect. Of course it goes a lot deeper than that. More has been written about music and art than anyone could read in a lifetime. There are tons of theories out there, a multitude of aspects to look at. Everything from pure craftsmanship and technique to highly esoteric topics regarding meaning and essence. Or to put it differently: A lot of people have spent a lot of time dwelling on lots of things concerning music and art. Several lifetimes have been devoted to it. What I am trying to get at here is how relevant this seems to be to us as a species. We have a very close and intimate relationship with music and art, one that seems to have existed as long as we. As humans, we need music and art. In fact it seems to be part of our very nature. And I don’t think anyone could claim that there’s a lack of music in our lives these days. It’s everywhere. Sure, one can questions what type of music we are exposed to, but the fact remains, it is there. For us all to hear. With the evolution of music distribution it’s also become a lot easier to get access to the less common kinds. It’s all there to be heard for anyone who wants and is willing to put a minimal effort into it. But what about art? Is that as readily available in our society? Not so sure about that. At least not in the same way music is. In a lot of ways art has lost its position in our collective consciousness. It wasn’t that long ago that art caused huge scandals, these days the stage has been taken over by reality TV and people who are famous for being famous. Art is something that’s happening behind closed doors in white-painted galleries amongst people with asymmetric haircuts and weird jewelry. It’s not something we concern ourselves with. And no, I am not claiming that the general public were ecstatic about Duchamp, but he did get headlines in the news paper for his “Fountain”. People kind of knew he existed. Just like they did Dali, or Picasso. Or even Michelangelo. Sure, we can try to reevaluate the concept and claim that this space is filled by advertisement today, or interior design, but I think we’re fooling ourselves by doing that. Because if we go back to the comparison with music I’m sure we can say that today’s popular music fills sort of the same function that folk music filled back in the day. Electronic dance music is today’s equivalent of swing or jazz and I think everyone knows that metal have very close ties with classical music. But how does art fit into all of this? Can the craving for the perfect stainless steel designer kitchen really be compared to the ornamentation on old rustic cabinets? Maybe, but a Nike advertisement can’t be compared to van Gogh’s “Sunflowers”.

I am by no means saying that we should start talking about Lady Gaga in the same way as we do Mozart, what I am trying to get at is how present the two art forms are in our everyday lives. We hear music everywhere, but we don’t really see art everywhere in spite of various attempts to “decorate” our public spaces. Because those attempts usually end up being just that – attempts at decoration. Sure there’s occasional public row about whether a certain monument is good or bad, but it’s not something we occupy ourselves with on a regular basis. And contemporary fine art may be asking some very relevant questions about the world and our society, but very few people are really listening. But there is actually one form of art that still manages to provoke a reaction from people, that’s still very much part of our collective consciousness – Street art.

Unlike contemporary fine art, street art still touches people’s daily lives. It’s all around us all the time. Even in those cities that have proclaimed a zero tolerance towards graffiti and street art you can still see it. It may not be in as great an abundance as in other places, but it’s still there. And it does cause reactions. For instance the aforementioned zero tolerance policies that by the way doesn’t really work. In any urban environment you will find street art. Some of it’s ugly but most of the time it’s great works of art that are being created out there. Free of charge for everyone to enjoy. A lot of times political, thought-provoking, sometimes funny, but almost always brilliant art. And relevant. You very rarely meet people who don’t have an opinion about street art, love or hate, but at least an opinion. How many people have an opinion about contemporary fine art? Very few. And that’s not because it’s not interesting or important, but because people simply don’t get exposed to it. But everyone gets exposed to street art. It’s not hidden away, it’s out in the open.

And that’s the thing about street-art. It’s actually relevant. Truly contemporary in its fleeting nature. Here today, washed away tomorrow. And people actually do care. They actually do take notice. If there’s one artist most people know these days it’s Banksy. Most people have heard about him and the mystery surrounding his identity. In a lot of ways he helped proclaim street art an actual art form and these days people will pay very good money for his art. But that’s beside the point. And I suspect even for him. Why else would he keep working out in the streets? It is after all called street art. Not simply because that’s where it is, but because that’s the intention; it’s supposed to be seen by everyone who moves around in the urban environment. It’s a real attempt at bringing back art into our daily lives, back into our collective consciousness. And there’s a very democratic aspect to it. Not only is it free for everyone to see, but it’s also free for everyone to do. Sure, it’s illegal in most places, but it’s no less illegal for a guy like Banksy than it is for you or me. And that’s really a factor that sort of levels the playing field. We can all get caught if we do it. Just like we can all enjoy it for free. Easy access even. It’s right out there in the street, no need to go to a gallery or a museum. Everyone can look and everyone can have an opinion. And I think therein lies the answer to the question I was pondering as I was walking around in that art fair. Street art is a way of going back to basics. It’s relevant and present in people’s lives. Almost everyone has an opinion about street art and that makes it matter, it stirs emotion, makes people think; all those things that art is supposed to do, but so rarely manages these days. So maybe street art will actually be the saviour of art, what will bring art back into our lives and once again make it a part of our collective conscious.

4 responses to “Street art the savior.”